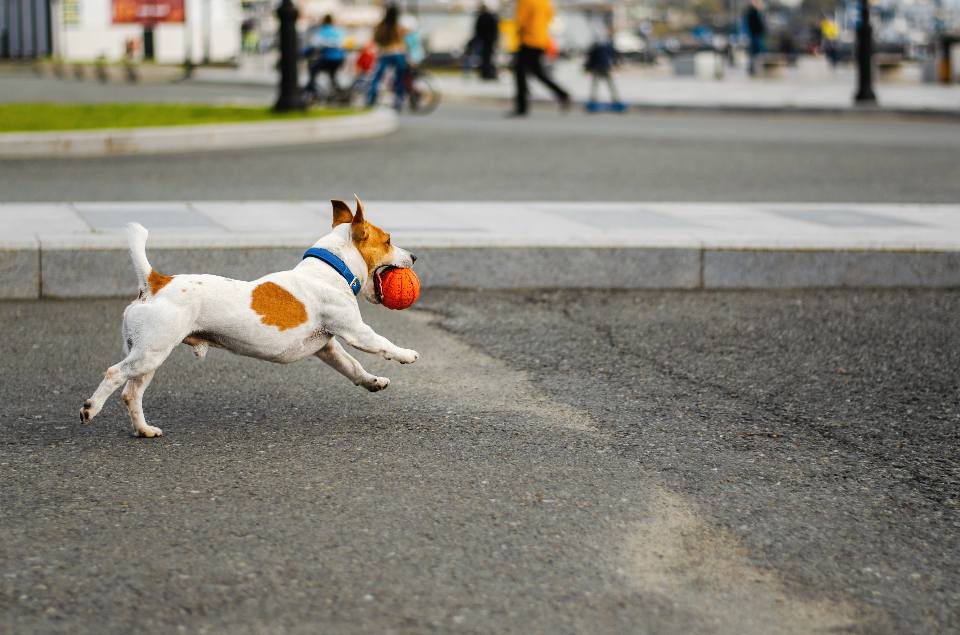 Jack Russell Terriers are famed for being energetic small dogs that enjoy physical activities like chasing balls and catching frisbees. These activities turn into dog games because if they didn’t, there would be no point right?

But what about in terms of running and exercise, how far can a Jack Russell go, and is it true they enjoy running as much as most other breeds?

Yes, Jack Russell Terriers are good running dogs and they make great running partners. They might be small, but they are athletic and they thoroughly enjoy the exercise that they get while running. Jack Russells are also capable of running long distances and have no problem keeping up with their running partners.

As well, they need the stimulation provided by getting out of the house and exercising, so it’s a win-win situation for both parties involved.

Yes, Jack Russell Terriers like the exhilaration of running. You’ll often see them chasing balls or playing games outside, where they can run to their heart’s content.

Because they are so small, Jack Russell Terriers don’t need a huge yard to run around in, and when you train them to run, they enjoy it. If you bring tennis balls and frisbees outside and toss them for your pet to chase, he won’t be disappointed.

Can you over-exercise a Jack Russell?

Jack Russell Terriers are capable of running for a long time, and they’ll work for longer if you give them rest. However, it is possible to over-exercise them so you need to make sure to let your Jack Russell sleep occasionally (if he’s been playing for a while) and that he gets enough food and water during the day.

Small dogs are generally not as fast as large ones like Labradors, but Jack Russells are pretty quick, so you’ll get your exercise running with them.

Jack Russell Terriers are fast runners and can run at speeds of up to 30 miles per hour. This speed allows them to keep up with you, or likely, beat you to the finish line.

How far can a Jack Russell run?

Jack Russell Terriers are known for their small size and low body weight, so you might be surprised how far they can run.

Running is a great way to keep your dog (and yourself) in good shape. You can run around your neighborhood, or along a bridle path.

Jack Russell terriers are the world champions when it comes to running. On average they can run up to 10 miles per day. Now, this probably depends on the size of the Jack Russell terrier, or what food you give it during the day. You should start with a small distance of 1 mile and then increase it each day.

Tips for running with your Jack Russell Running with your dog is a great way to enjoy the outdoors, get exercise, and have fun. If you’ve decided that you want to do it with a Jack Russell Terrier, there are some things you should know first. Here are some tips to help you run safely with your Jack Russell.

Your Jack Russell Terrier may be a little reluctant to run with you in the beginning, so try and make it fun for him. You can bring his favorite toys, or get him involved in a game like fetch. Soon enough he’ll want you to run with him all the time!

2.) Make sure your dog is healthy first

Before making your Jack Russell Terrier run, make sure he’s healthy and has no illnesses that might hinder physical activity. You should also wait until your dog is a mature adult before starting to train it for running, as this will help keep him fit and strong.

If you don’t have too much land in your area to run on, you could start by running around the block or in the house. It should not take long until your dog catches the excitement of running with you!

Once you have started training your Jack Russell for running, go through the routine every day for about 20 minutes to keep his mind and body conditioned. This way he will be able to run longer distances and with more energy.

Eventually, he will be able to run for longer periods of time without getting tired.

Don’t try to push your Jack Russell Terrier to run too much. It is not healthy for dogs to over-exercise and can lead to injuries. You can also injure your dog if he doesn’t have enough strength in his body frame – so it’s better that you avoid this kind of injury altogether.

6.) Take some water with you

Your Jack Russell Terrier will require some water during the day while you are training him for running. It’s better to take water with you in a bottle or training cup so that you have so much needed water with you every time your dog needs to drink.

7.) Put your Jack Russell on a leash at first

In order for your dog to not get distracted by other dogs or other things he sees while he is running, it is best to keep him on a leash and close to you. You can take the leash off after some time if your dog listens well to your commands.

Never forget to take a poop bag with you when you run with your Jack Russell Terrier. If he defecates while running, you can deal with it right away.

9.) Reward your Jack Russell Terrier after each run

As a reward for all his hard work during running sessions, give your Jack Russell Terrier a treat or a toy that he really likes. This will make him want to run more often.

Jack Russell Terriers are strong and energetic dogs, so running will definitely satisfy your need to get some healthy exercise.

Once you get them into a running routine, they’ll want to go outside and run again when they wake up in the morning or after they’ve had their afternoon nap. If you want your dog to be a good running companion, train both of you how to run together as early as possible.

Do remember that over-exercising can harm the body of man or beast, so don’t forget to give your Jack Russell some time off every now and then.