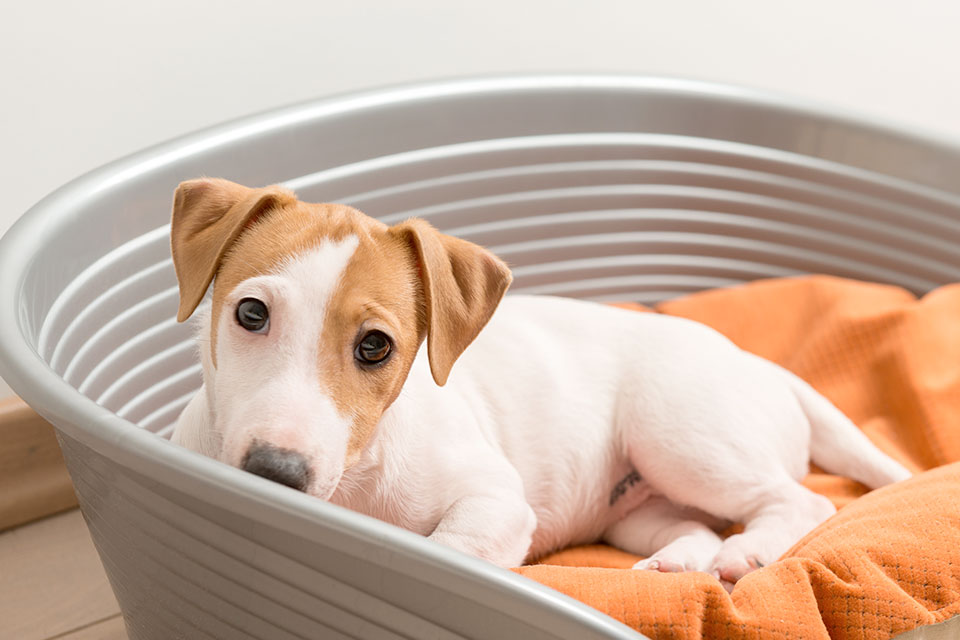 A Jack Russell that whines constantly and persistently throughout the day could be seeking attention or food. It could also be indicating that there is something wrong with its environment, or it may have learned how to get the results it wants by whining.

Whatever the cause, if you are frustrated with your Jack Russell’s behavior, you’ll want to nip it in the bud before it becomes an annoying habit.

Why is my Jack Russell whining?

Your Jack Russell may be whining simply because it is lonely or bored. If that’s the case, then its whining is a plea for attention and affection from you. Make sure you are giving your dog plenty of attention every day, and that it has something to do every day.

How do I stop my Jack Russell whining?

Let’s have a look at a few ways you can stop your Jack Russell whining.

1. Make sure your pet gets enough exercise every day

Regular exercise will help your dog eliminate pent up energy and the accompanying need to whine or bark. A walk on a leash along a safe trail will do the trick, but you should also give your dog an opportunity to play.

2. Set firm rules and stick to them

Be consistent about your expectations for the way your Jack Russell interacts with you and other members of your family, including if or when it’s acceptable for it to whine. Make sure you stick to your principles and communicate them clearly and firmly.

3. Make sure your dog gets plenty of good food and water

Food and water are essential to a dog’s health, and yelping for attention or food is a way it communicates its need. If your Jack Russell is not receiving the amount or kind of food it needs to stay healthy, you will need to educate yourself on what foods are good for a Jack Russell.

4. Take your Jack Russell to a trainer if you feel the problem is beyond your control

It’s stressful for both owners and dogs when barking and whining becomes an unwanted habit, so consider hiring a good trainer to work with you on the issue.

A good trainer will help you determine the root of the problem and offer methods for extinguishing the behavior that is causing you trouble. The best trainers will even be available for check-ups after your home study is complete.

5. Train your dog to ignore other dogs

There are several training methods that can help your Jack Russell learn to ignore other dogs and people. For example, you can train your pet to bark or whine in one direction only, and then it should stop barking in the direction you have designated as the “safe zone.”

If it is barking at a specific dog, teach it to ignore the other dog by clapping your hands. The goal is for a Jack Russell to learn to ignore all of its canine companions when there is an unknown presence near its vicinity.

6. Speak to a veterinarian if you suspect your dog has an over-stimulation syndrome

Early training and socialization are critical for all dogs, but Jack Russell’s in particular have a tendency to be more excitable than some other breeds.

The over-stimulation syndrome can lead to a Jack Russell’s incessant whining and barking, so make sure your dog knows how it should behave around other dogs and people.

This will help it avoid becoming frustrated or anxious when it is out in its yard. The over-stimulation syndrome can be addressed with training and medication. Your vet may be able to recommend further reading or provide you with tips for addressing this condition.

You may think your Jack Russell is trying to communicate with you when it whines, but in reality, it just wants attention or food. If you give the dog what it wants when it whines, the behavior will continue.

Even if you are frustrated, don’t let your pet know and just continue doing what you’re doing as if nothing is wrong. If the dog wants your attention, then ignore it until it stops whining.

Make sure you are giving your dog plenty of attention every day, and that it has something to do every day.

This could be taking your dog out for a walk or a game of fetch. If you make time for these things every day, then your dog will feel more fulfilled and its whining will subside as a result.

9. Give affection to your Jack Russell every time it does something right

When you are training your Jack Russell, always reward good behavior with treats and praise. If it is giving you a few whines in between its good behavior, you can also give it a small treat every time it stops the whining.

10. Find an activity that calms you down

When you are upset or stressed, it is natural for your Jack Russell to react with barking and whining. Take a walk, play a game of fetch, or calm yourself with a nice cup of herbal tea.

If you can’t find anything that helps you to relax and know where your Jack Russell is at all times, then consider getting a second dog. This will reduce your Jack Russell’s whining because when both are home, the dogs will be busy and entertained instead of just one dog feeling bored.

11. Don’t make a fuss over the whining

If you give in to a Jack Russell’s whining, it will learn that it can get the attention it wants by crying at will. You should also communicate clearly and firmly about how your dog should behave, and avoid giving your pet attention in response to its crying.

If you don’t want to give up on it, then consider getting a second dog or adopting one from an animal shelter.

Some dogs may learn to whine or bark as a manifestation of their excitement or pent up energy. It’s also possible that your Jack Russell may have learned how to get the attention it wants by whining.

Whatever the cause, if you are frustrated with your Jack Russell’s behavior, you’ll want to nip it in the bud before it becomes an annoying habit. Consider having a look at some of these tips for stopping your Jack Russell’s whining behavior, and make sure you can keep in mind all of these tips when taking care of its needs so that you can prevent this from becoming an unwanted behavior.